s his company prepares for PacPrint in Melbourne, one of web-to-print’s early pioneers, Ewen Donaldson, reflects on the way technology has changed over the years, how the developments of the past are ever-more-quickly being outpaced by today’s sophisticated web-to-print solutions…and why the pace of progress makes the Vivad stand at PacPrint a must-see for future-focused businesses.

For Ewen Donaldson, memories of the mid-90s are clear, with mobile phones testing our boundaries of cool. While some scoffed at the dude walking down the street with his Motorola brick against his ear – held high with a bulging bicep parallel to the pavement – Donaldson says the promise of these technologies quickly became clear, setting the foundations for a mobile and digital revolution that has transformed our world.

“Tradies got in early with the prospect of being able to run their business from their car, while many of the rest of us waited for the stigma to subside before we jumped on the bandwagon,” Donaldson recalls, “but it didn’t take long till we were rushing to a plethora of newly opened mobile phone shops to sign over a kidney to buy the latest Motorola Flare or a Nokia 3110.”

If you're over forty and think back to buying your first mobile phone you can probably place yourself in one of the segments of the technology adoption curve. Perhaps you were one of the innovators, rushing out to buy the first phone on the market, or were you a laggard dragged kicking and screaming by friends and family complaining that they couldn’t contact you, or maybe somewhere in between?

All of us fall somewhere on the Technology Adoption Curve
“All of us fall somewhere on this spectrum,” Donaldson says, “and the technology adoption curve can be applied to any emerging technology. With web-to-print increasingly gaining traction as a method of print procurement, it is interesting to apply this distribution curve to where we are at the moment, where we were five years ago and where we are likely to be in five years’ time.”

Vivad was a pioneer in web-to-print, embarking on a mission a decade ago to build a web-to-print portal which would go beyond a simple web store and allow users to customise the size of their print product.

“They could upload their files and automatically have them pre-flight checked to ensure they were set up to the correct proportions and resolution,” Donaldson says, “and the portal would allow the user to generate an approval document with the company's logo so that they could send it out to their clients for approval before placing their order.

“They could select from a range of couriers and freight options based on the delivery address and the theoretically calculated packing dimensions then, after placing the order, the user would be able to track their job through production. It was a revolutionary idea.”

At PacPrint 2017 – just five years ago – Vivad realised that vision with the launch of Vivtrack 2 Web-to-Print portal.

“We had an underwater themed stand complete with an inflatable submarine, and a ship themed meeting room clad with aquatic portals containing live fish,” Donaldson recalls with a laugh. “It was quite the attraction, so it gave us plenty of opportunity to give one-on-one and group demonstrations to visitors, showing off all of the features of the portal – plus we plied people with free coffee and bribed them to provide us with their details by giving away UE Booms, iMacs and $1,000 print credits!” 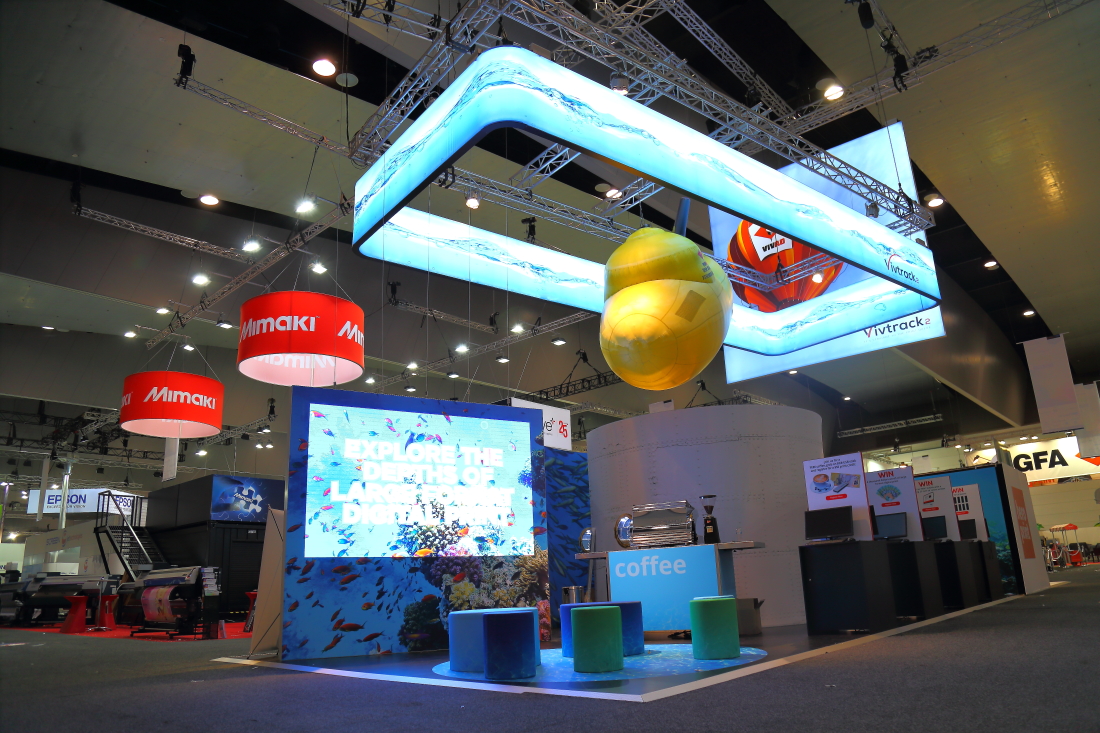 Vivtrack 2 made a splash at PacPrint 2017, introducing the industry to web-to-print

It was a bold strategy, but it worked – and over four days, Vivad registered 375 new users, giving it the beginnings of a user base.

While it made a great splash, so to speak, Donaldson admits the adoption rate in those early days was slow, despite the promise the product offered for a better, more productive and more profitable world.

“I think many people were just reluctant to give up on the back-and-forth communication  associated with ordering through traditional channels,” he says, “but not everyone fell into this camp and we saw a small number of innovators who were willing to participate in the ‘bleeding edge’ of web-to-print technology.

“Having real user feedback from those early adopters was invaluable in teaching us what worked with the portal and what didn’t – and that allowed us to go back to the drawing board to significantly rewrite Vivtrack for its next iteration.”

Vivtrack 3, released in 2019 at PrintEx in Sydney, was slicker, more powerful, more intuitive and user-friendly, featuring new innovations like such as trusted groups, which allowed teams to collaborate and track each other's jobs.

It took the software to a new level and, to mark the launch, Vivad did the same with their exhibition display, with an ‘out of this world’ experience.

“We thought, what better way to launch new software than to go with a space theme and, never the company to make a half-hearted attempt, we built a stand complete with an inflatable rocket and UFO, dynamic lightbox and command module,” he recalls. 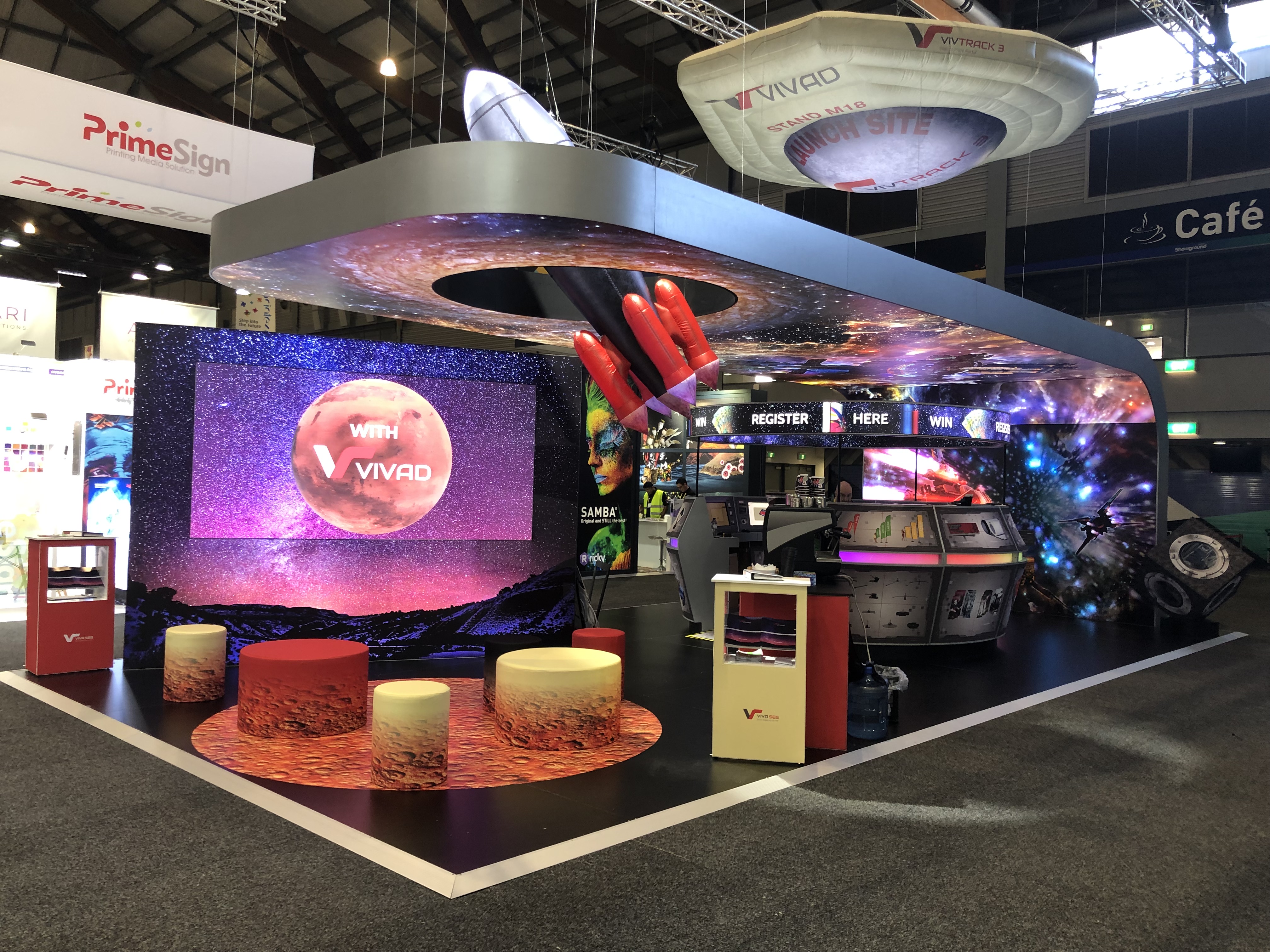 The relaunch of Vivtrack in 2019 at PrintEx marked a new phase of growth for the portal.

“At the same time, the advances in Vivtrack 3 saw many of our trade clients discovering how they could use Vivtrack as an extension of their own business. Clients can receive instant quotes, pre-flight check artwork and book jobs online, allowing them to be responsive to their own customers and, in effect, turning them into the print service provider.”

These developments drove what Donaldson refers to as a ‘definite paradigm shift’, with Vivad’s user base growing through word of mouth referrals from the initial 375 users following PacPrint in 2017, to well over 2,500 active users today

Despite this rapid growth, Donaldson believes the industry is still in the early adoption and early majority stages of the technology adoption curve, with many businesses still to benefit from this game-changing technology.

“It will be interesting to see how buying behaviour of print progresses over the next five years and we certainly look forward to showing some of those still ‘on the fence’ about web-to-print just how the latest innovations in Vivtrack can transform the way you do business, making it easier to provide superior service, deliver an outstanding product…and build your business profitability and success,” he says.

“As visitors to PacPrint will see, Vivad continues to push the technology to its limits – and we look forward to continuing to participate in this emerging and vibrant space well into the future.”

For those who missed Vivad’s awe-inspiring Space-themed stand in Sydney in 2019, there’s more good news, with the full ship of new highlights touching down in Melbourne so that visitors can immerse themselves in the experience of what previous visitors described as ‘the most incredible stand I’ve ever seen in my long history attending exhibitions’.

“We’re inviting all PacPrint visitors to come and see us on Stand B90, receive a personal demonstration of the Vivtrack web-to-print portal, grab a free coffee and register to go into the draw to win an iPad Pro, one of four $1000 Print vouchers, or one of four UE Booms,” he says.

PacPrint, Visual Impact Melbourne and the Label & Packaging Expo will run from 28 June to 1 July at the Melbourne Convention & Exhibition Centre. Register online or go to www.pacprint.com.au for more information. Find out more about Vivtrack by watching the video here